Rock Wall at the Practice Area

It has already been a busy summer with various projects being undertaken throughout the property. Without question, the most visible enhancement to the golf course this year is the construction of a rock wall along the lake bank of the chipping and putting greens. 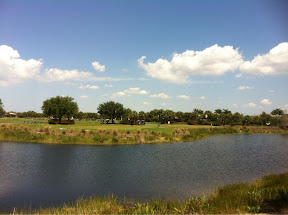 The project was conceived by the Green and Grounds Committee last year and approved during the budget process for completion in 2012. Once the golfing season had finished, the necessary permits from South Florida Water Management District and Lee County approved and the lakes were at their lowest level, work commenced in earnest. 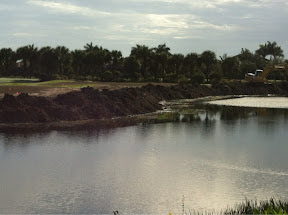 Heavy equipment was rented to prepare the lake bank, transport the rocks from the maintenance facility and to finally position the rocks. Ricardo Gomez, one of our senior staff members who has assisted me with previous rock wall efforts in the past, was once again asked to help with the project. He operated a large front end loader with a rake attachment to cautiously move over 250 rocks to the practice area. An excavator, with a hydraulic 'thumb' attachment was then used to precariously position the rocks in their final resting position. I was fortunate to have received training on this equipment back in Australia many years ago and enjoy the challenge of operating such powerful machines. 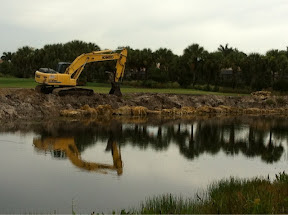 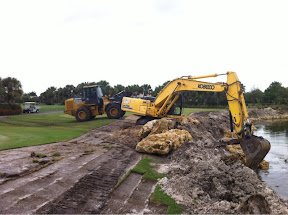 There were 3 layers of rock used to produce the necessary height to match the level of the practice greens. Each layer had a cloth sheet placed behind it to help prevent erosion before being back-filled with soil. 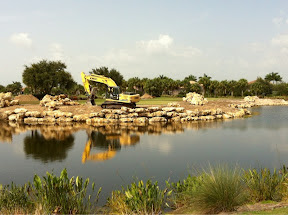 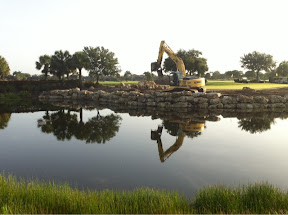 Over 30 trucks of soil was needed to level the newly created area between the practice greens and the rock wall. Additional sprinklers were added by Irrigation Technician, Neil Johnson, to provide water to the area. Sod was cut from out of play areas throughout the course and was installed by Assistant Superintendent, Riaan Potgieter, with help from our own staff members. In all, the project was completed in two weeks. Besides an enhanced view from the clubhouse and hole 18, the rock wall will allow for an increased practice area for golfers and potentially allow for future improvements. I can't thank my staff enough for the extra effort that it takes to complete such an immense project 'in-house'. Incredibly, the entire golf course had all cultural practices completed during this time by our staff members including aerification of all greens, fairways and roughs as well as double verti-cutting of all fairways and the clean up that comes with it. I hope that you are as proud of, and thankful for our staff as I am.

Posted by Copperleaf GC Maintenance at 5:10 PM No comments: