There is constant maintenance, improvements and enhancements carried out throughout the golf course on a daily basis.

Besides the routine course set up practices such as mowing the greens, raking bunkers and installing the cups, our staff remains busy with various improvements to the course including the addition of pine straw in high visible areas, edging grass from cart path edges, bunkers and sprinkler heads and trimming shrubs and trees.

Through the recent member survey and focus group meetings, there was mention of the abundance of the Native grasses throughout the course, in particularly around some of the landing areas and bunkers. The Green Committee, at their January meeting, discussed ways to maintain the integrity of the course but to also be fair for the varying levels of golfers at Copperleaf. It was decided to improve several areas throughout the course including holes 1, 2, 4,9 and 16. 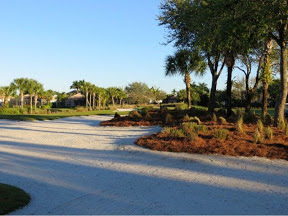 Our staff have been hard at work over the past week "cleaning" these areas by trimming the various shrubs, grasses and trees to improve playability. These revised areas now look fresh and clean and not only allow a golfer to find their errant golf ball, but to also have a chance to advance it toward the green. 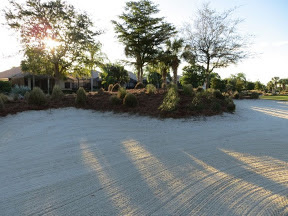 The entire maintenance department greatly appreciate all of the positive feedback received during the survey and focus groups and look forward to continuing to improve the golf course for all to enjoy. 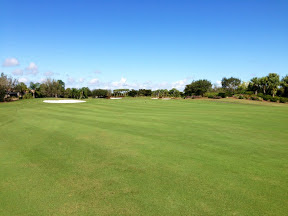 Copperleaf's Waste Bunkers have always been a topic of discussion since the course opened in 2000. Originally created with crushed concrete, the material was changed many years ago to Coquina (Co-keen-a) to add a contrast between the green fairway grass and the natural orange color.

The Coquina is mined on the east coast of Florida, near Melbourne, and hauled over on large trucks. Without question, the appearance of the orange sand and shell is quite dramatic, however, from a playability point of view, there is much to be desired.
With constant cart traffic, the sand is quickly compacted creating a hard, and difficult, surface to play from. 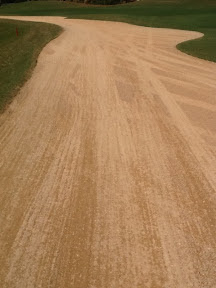 In recent efforts to "soften" the material, a machine was borrowed from a neighboring course to break up the sand. This method worked for a brief period of time however caused "wash-boarding" on the surface and made it unpleasant for golf cart passengers and maintenance vehicles alike. 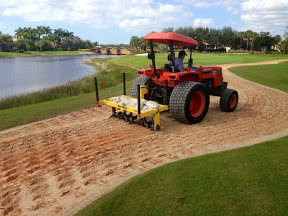 An improved solution was researched and piece of equipment was purchased that tows behind a maintenance vehicle. This new "rake", a DR Power Rake, has been extremely successful in smoothing out the surface and providing improved playability. 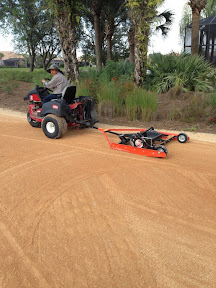 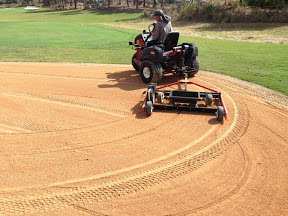 Even after the Coquina paths have been raked with the DR Power Rake it does not take long for the material to be compacted due to the cart traffic. 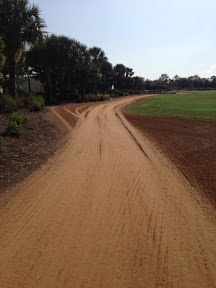 The Green and Grounds Committee has developed a plan for the future to reduce the width of the Coquina areas, in particularly on holes 4, 5 and 18. These areas would then be classified as cart paths, thus providing relief for golfers. These ideas will be reviewed once the Long Range Plan has been provided by our Architect, Kipp Schulties, in March 2013.

Posted by Copperleaf GC Maintenance at 1:24 PM No comments:

Four Birdies on one hole!

Although one birdie is always welcome during one round, this photo, taken by Assistant Superintendent Riaan Potgieter, shows four birdies on one hole. Wouldn't that be nice!! 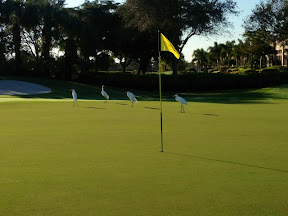 These Snowy Egrets were enjoying a morning stroll on hole 9

Posted by Copperleaf GC Maintenance at 5:29 PM No comments: