Copperleaf has experienced over 20 inches of rain over the past 30 days. Some recent photos taken last Thursday afternoon highlight the effect the rain has on the golf course.

Fortunately, our course continues to drain extremely well with today, Monday September 26, being the only day we have used cart path restrictions. Unfortunately, the amount of rain continues to slow progress on our course projects and detail work. The amount of labor required to repair bunkers and other washouts to prepare the course is significant. The most challenging aspect of this is that on several occasions, our staff have completed the repairs only to have another significant rain event wash out the repairs again.

I appreciate everyone's patience during these challenging times and give full credit to my staff for enduring through the rain, lightning and repeat work. - Posted using BlogPress from my iPad

Posted by Copperleaf GC Maintenance at 1:29 PM No comments:

There is an immense amount of trimming required to be completed throughout the property over the next several months.

Once these areas are trimmed, a growth regulating product will be spread throughout the garden beds to slow the growth of the plants and increase the time between re-trimming.

Following the completion of these areas, additional pruning will continue throughout the property as we prepare for our annual pinestraw application in December.


- Posted using BlogPress from my iPad

Beginning next week there will be an outside contractor on property trimming our Palm trees.
With over 1300 trees to trim, I expect them to take 2 weeks to complete the task pending no adverse weather conditions.

Please be patient with their employees and the noise of their chipping machine as they move through the course. Work will not commence until after 7 am each day with both pruning and chipping being completed on the golf course. The mulch that is generated will be hauled to the maintenance facility for later use.


- Posted using BlogPress from my iPad

Location:Bonita Springs, Florida
Posted by Copperleaf GC Maintenance at 6:27 AM No comments:

There was another direct hit from a lightning strike at Copperleaf yesterday. This time, our irrigation system antenna was hit causing it to explode into hundreds of pieces. Fortunately no one was injured although many of our employees, including me, were a little shaken. I was in my office at the time when the lightning hit which is only 8 feet, and a thin piece of glass, away from the antenna. The power of the lightning unfortunately caused our irrigation communication repeater, or base station, to be damaged as well. Toro, our irrigation company has sent a new base station overnight and with a new antenna being installed today, irrigation will once again be able to take place.

- Posted using BlogPress from my iPad

Posted by Copperleaf GC Maintenance at 6:13 AM No comments:

During the week there was more heavy rainfall causing damage to the course, and in particular, the bunkers. Although the repairs are made within two days to make the bunkers playable again; this additional labor takes away from the many other projects underway throughout the course.
﻿ ﻿ These washouts are detrimental to the playability of the bunkers in the long term as well. Native soil and gravel used for drainage are exposed and are extremely difficult to remove from the bunker sand. Unfortunately, some of this foreign material gets incorporated into the white bunker sand causing inconsitencies from one bunker to another.
All efforts are made to prevent this and to also add new, clean sand to the bunkers. During November and December; once the heavy rain season has finished, many bunkers will have new sand added to them in preparation for the golfing season.

There was also significant thunder and lightning during the storm. In fact, one lightning strike had a direct hit on a sprinkler along hole 14 rough. The force of the lightning was so powerful that the sprinkler head literally exploded causing water to flood the area until we arrived early the next day. Thankfully, the lightning surge protector in the control box sacrificed itself to protect other major components.

﻿﻿ ﻿﻿
The take home ﻿message here is to please listen for the lightning detection warning sirens and take shelter at the clubhouse. Copperleaf is not immune to a direct hit from lightning. Sprinklers can be replaced!
Posted by Copperleaf GC Maintenance at 1:40 PM 1 comment:

The landscaping along Copperleaf Blvd and hole 13 is now complete. Hundreds of plants and dozens of trees were installed along the roadway to help frame the hole and enhance the view from both the golf course and the roadway. The plants installed include Dwarf Bougainvilleas, Dwarf Oleander, Trinet, Star Jasmine, Fire Cracker and Thryallis. 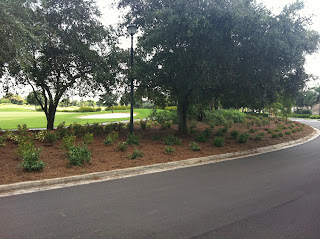 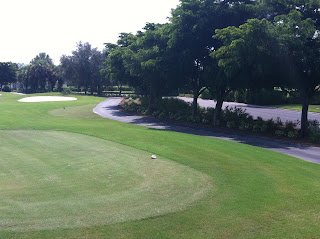 Also incorporated into the design is a hedge of red flowering Jatropha and also Silver Buttonwoods. This hedge will create protection for golfers on the tees from passing cars.
Posted by Copperleaf GC Maintenance at 1:24 PM No comments:

As of today, September 16, the practice tee and par 3 tees will be open for normal play.

These areas were reconstructed in June and have now matured sufficiently to allow for regular play to resume.

Back in June, the original turf was removed to a depth of 2 inches and then leveled using additional soil. The level surfaces were then re-grassed with a new variety of Bermuda grass; 'Celebration'. The Celebration quickly established and was allowed sufficient time to mature and become stable. It will take one full season for the turf to fully mature and develop a significant root system; however, with increased fertility and cultural practices, the playing surface will be presented to a very high standard on a daily basis.

Posted by Copperleaf GC Maintenance at 1:13 PM No comments:

In 2013, the Copperleaf cart path's are scheduled for re-sealing. Some of you may notice two strips of black seal coat near the bathroom of hole 4. These are test plots for two different seal coat options.

The test plots will be monitored to determine which one is best suited for the high and concentrated traffic our cart paths experience. 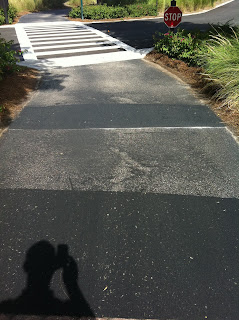 Results and cost differences will be presented to the BOD for their review in 2012. Prices will also be obtained to overlay the cart paths with new asphalt. There are several areas experiencing damaged asphalt from either a thin original application and also continual washouts undermining the base rock.
Posted by Copperleaf GC Maintenance at 12:21 PM No comments: