Over the past two weeks, a contractor has been employed to install a new layer of sand in all of our bunkers. 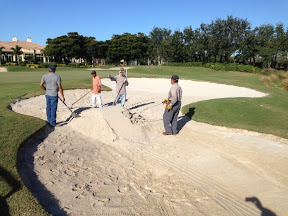 The sand being used is from a local mine and is called "G Angle". Different from the sand that has been used in the past, this sand is "crushed" at the mine to create "angular" granuals. Most Florida sand is round in shape and can create softer playing conditions within the bunkers due to its structure and ability to compact. The "G Angle" meets the USGA recommendations for bunker sand.

This new sand, due to its varying angles, resists compaction and so doesn't allow the ball to sink into the profile. 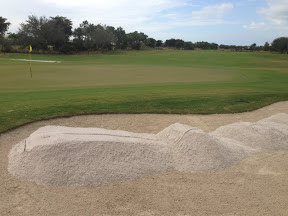 During this process, our own staff members have been hard at work preparing several bunkers for the new sand. Over 10 bunkers had all of the original sand removed due to contamination from organic material and drainage gravel. 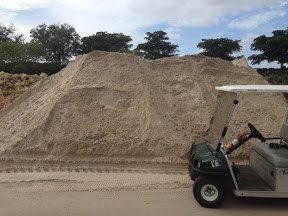 Over 650 tons of the sand has been installed throughout the course and is now providing consistent playing conditions and a beautiful contrast between the sand and the green turfgrass surrounding it.

Please be aware that it will take "some" time for the sand to settle. Daily raking with our bunker raking machines and the use of irrigation water will help with this process.