Over the past 11 years, the Tifway 419 Bermuda grass that is planted on the course and used for our tees, fairways and roughs has been encroaching into our Tif Eagle putting greens.

During the summer months when the 419 turfgrass is actively growing, it persists into the putting green where increased moisture and fertility are used. Unfortunately, when the 419 is mowed at greens height, it is easily scalped and produces a white appearance around our greens perimeters. 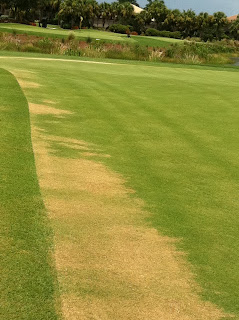 The white/yellow color is the Tifway 419 Bermuda grass that is growing into the putting green as seen here on hole 18.

To help mask the issue, a specialised mower has been dedicated to mowing the perimeters of the greens at a higher height and which also utilises a solid roller to keep the blades from digging into the turf grass as it turns.

To correct the issue in the future, I am working with Green Committee Chairman, Ike Eikelberner, to gather costs to present to the BOD to have the affected areas removed next summer. This practice would involve spraying Round Up on the affected areas, mechanically removing the dead turf and then aerifying the greens. The cores generated would then be raked into the perimeter and encouraged to grow. The benefit of this program is that the turf being used is the original turf from Copperleaf and not one from an outside sod farm.

Although the entire process would take approximately 8 weeks to accomplish, the end results would be worthwhile. Only the outside perimeter of the green would be affected for golfers during the summer months.

I will keep you informed as to whether this project is approved for 2012.
Posted by Copperleaf GC Maintenance at 2:33 PM